When is the best time to see the Great Wildebeest Migration? 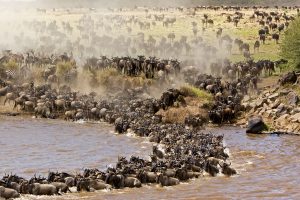 The mass wildebeest migration moves from Masai Mara Reserve (in Kenya) to Serengeti National Park and back at different points throughout the year. Chances are, they’ll be somewhere within the Serengeti when you visit — the only question is where!

If the migration happens to be in the far north — or west — of the park, it may make it tough to see them, requiring a non-stop day of driving just to get there and back (not that we haven’t done that before). If in the central or southern regions of the park, it makes everything much more accessible.

For you to better plan your trip, please see below for where the wildebeest herds generally are during each part of the year:

During these months the wildebeest herds tend to congregate in the southern areas of the Serengeti, where lush grasses have been growing from the “small” rainy season precipitation during November. This is also where the wildebeest mothers will give birth to their young in February, which is definitely a sight to behold.

In May the herds and their young tend to migrate northward, ending up primarily in the central region of the park. This allows for the easiest viewing with the least amount of driving, as we usually base our guests somewhere within this region of the Serengeti anyway.

June is also a great month for easy access to the migration, as they are in the central-western region of the Serengeti. This is also a good time to try and see them cross the Grumeti river, where many crocodiles await a chance to try their luck and grab some “fast food.”

Starting in July the herds slowly work their way from the central-western region of the Serengeti up into the northern regions of the park, eventually crossing the Mara river into Masai Mara Reserve in Kenya. September-October can be a difficult time span to catch the migration, as it requires a long drive north (and sometimes that won’t even be enough, if they have crossed into Kenya already).

November brings the “small” rainy season, which the wildebeest follow, as it brings new grass to the Serengeti plains. This is a great time to see the herds, as they’ll be in the central area of the park, but exactly which part of November they’ll arrive there from the north is all dependent on the rain patterns of the year.

Climate change and abnormal weather patterns are causing some changes in the timing of the migration, so please check with us if you are interested in seeing the migration and we will do our best to make it happen.

Click here to go back to the main Frequently Asked Questions page.